After dispatching my wife and children to work, nursery and child minder respectively it was time for me to make the long pilgrimage to Iceland. This would involved walking, trains, buses and hopefully just one aeroplane. The one and a half mile walk to the train station struck home to me that it had been over ten years since I went back packing around the globe and I was long past accustomed to carrying such weight. It felt like I would never get to the train station but, of course, I did. There then followed an almost perfect set of connections which got me to Glasgow airport, through check-in and security with almost no delay, and before I knew it I was sitting with some corp mates and some Zebras drinking in the airport bar.

I'm not used to lunchtime drinking so after only two lagers I had a bit of a buzz going on. The flight to Iceland was rather boring although another fanfest attendee commented that the landscape while descending to land was "like landing in Mordor". 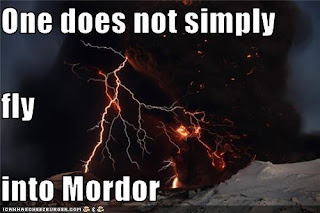 I did my shopping in the arrival duty-free area to get some wine and a bottle of whisky for my hip-flask. Two top tips: 1) When buying wine either make sure you have a cork-screw with you or pick a bottle of wine with a screw top. 2) When buying whisky buy something nice, don't pick a blended malt just because the name makes you think of Game of Thrones (King Robert the Second was the whisky). The final bus journey of the day seemed to take forever but I was finally at my hotel and in a pokey wee room. Hotel Cabin would appear to be so named as the rooms are the same size as the inside cabins in a ferry. An added feature was my window which opened inside the hotel.

After dropping my stuff and calling home I had a brisk walk to the Harpa conference centre followed by random direction changes trying to catch up with corp mates to go have food. While waiting outside Muan Thai on Laugavegur for more corp mates to find us we were treated to a display of how Icelanders handle shoplifters. An old, drunk guy had pinched a sandwich from the supermarket under the Thai restaurant. After a discussion with a large store employee the drunk guy decided to take a cheeky bite from his stolen sandwich. This resulted in the employee picking the old guy up by his armpits and bodily hauling him back into the store.

Tasty Thai food consumed and it was time to park ourselves in the Celtic Cross so the rest of my attending corp mates could find us. Over a short time everyone turned up and we parked in the little booth just to the left inside the door. We designated it a C3 as there was only one way out and in but we couldn't decided whether the rest of the bar was hisec or lowsec. Yes it's sad but yes we were drinking (and drinking, and drinking). It was brilliant to finally meet these people I've been hanging out on comms with for almost two years for some of them. Also spoke with people from other corps who were filling the rest of the bar. The atmosphere was great. Eventually we realised we were the last people in the bar and thought it might be a good idea to head home. We all had to be up for the Golden Circle tour the following morning.
at 09:28
Email ThisBlogThis!Share to TwitterShare to FacebookShare to Pinterest
Labels: eveonline, fanfest, travels