It was a quiet night even though there were a few of us on. Most people were up to little pieces here and there but nothing organised was happening. I suggested we clear out some of the sites in the home system and one other person was good to go. Nobody else was up for it and with just two of us it would have been more of a chore than anything.

"The responsible thing to do would be to get some ice product hauled in" I was told. Our reserves had dropped below a month, and with a K-space connection only six jumps from our storage offices they were right. Reluctantly I switched from my PvE Tengu to an Iteron V and headed out. At the same time I logged in my hauling alt and had her take an Orca the 22 jumps from her current location near Hevrice to rendezvoux with Orea in the corp office. I got the first load of ice product hauled in and was back for a second load before the Orca arrived. Filling both the Itty and the Orca I got them to the entry system and hauled the ice in.

I was taking the Orca back for another fill of Ice when the scout in C3a announced a Legion on d-scan. With eight Itty V loads of ice now in the hole I was quite happy to call it a night of hauling. "Can we get the Legion?", I asked. Just then my newly returned corp-mate Epigene logged in and we appraised him of the situation. "Where do you want me" was his reply. Game on. Epigene jumped into c3a at exactly the same time as the Legion jumped into our home system. Talk about a perfect cross-jump. Gerandor in his Broadsword put a bubble up and I reshipped into a Brutix and aligned to the outbound hole.

The bubble had the desired effect: The Legion panicked and jumped right back out into the waiting clutches of Epigene. Polarized, he now had nowhere to go. I hit warp while Gerandor announced he was jumping through to get the Legion bubbled in c3a. This ship was not getting away. Evidently I had hit warp when Gerandor's bubble was still up and I landed 15 km from the hole. Burning the remaining distance I jumped through and burned at the Legion. I am very out of practice with drones and generally forget I have them. This time I didn't and set them loose on the target. Guns blaring, medium neut running, I settled into a lazy orbit around the Legion and watched as his armour melted away.

We didn't expect the self destruct message. In fact we didn't notice it until reviewing combat logs later. The Legion died with 60 seconds left on that clock anyway. The pod died very soon afterwards. This left us puzzled. Why did he initiate self-destruct? Is there some way to dodge a skill point loss by doing that? I need to get on SiSi at some point and check that, unless anyone here can clue me in.

It was with our home well replenished with fuel and a new kill or two on the killboard I went to bed. Sure we didn't get to run sites but who wants more ISK anyway...

I mentioned recently that post-Fanfest was a really busy time for me in EVE but I never went back to say why. Now would probably be a good time to cover that. For some time the activity levels in Zero have been lower than I would like. Despite our best efforts at recruitment it was proving difficult to get new people into the corp and those we did recruit were largely failing to stick around. Living in W-space with Zero does require a healthy dose of self-sufficiency which many people seem to underestimate regardless of how that point is pressed home. For anyone living in W-space you have to go out and make things happen; nothing comes to those who float in a POS, except maybe eviction. Our home hole was a class 4 wormhole with a static class 4. This meant we always had a minimum of three jumps to K-space, and often more. This remoteness grew harder to live with as activity levels declined. Somewhat ironically it was the remoteness that was causing the drop in activity as potential recruits were put off by being cut off from K-space so. I don't know, kids these days want it all too easy.

Some time before Fanfest we had a corp meeting to discuss the situation and decided on a stay or move vote. The move would be to merge with another of the alliance corps in their C4 with a static C3. If we voted to stay then all was good. If we voted to move then we would move after Fanfest. The result was not as decisive as I had hoped and as I watched the results roll in I changed my mind several times. In the end, not counting my vote, the result was a 50:50 split. That left the decision down to me. I decided to go with my initial instinct which was to move. Where we were going was easy. How we were leaving was less easy. The very reason we were moving was the problem. We had been in our home system for about 18 months and the scale of the problem measured as 325 ships and 12 million m3 of 'stuff'. This all had to be safely moved to hisec via routes we scanned ourselves. Level four distribution missions can kiss my arse. 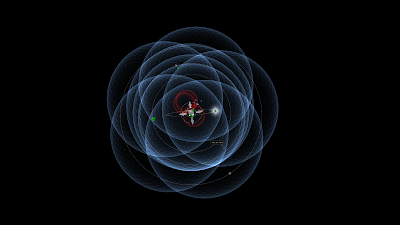 One of my directors turned in a project plan for the move out. He set the timing at three months to do the move out. I thought that would kill the corp dead and said we do it in six weeks. A little bit of bargaining fixed the plan at eight weeks and then we got started. People were expected to move their own stuff out and mostly this happened. One Rorqual pilot spent a night catching up on all the ore compression we hadn't done and that made a massive dent in the volume of stuff to move out. Another couple of pilots who were planning to leave the corp soon put in heroic efforts to move as many ships out as possible. There may have been self-destruct sequences set, but largely all the ships made it out intact. With all this happening it was great to see the first tower come down exactly on schedule

The second tower came down a week ahead of schedule and I had to think about the dreaded process of selling the hole. Best case, worst case and abandonment prices were worked out and just when I was about to advertise the hole for sale a random conversation on jabber essentially sold the hole without trying. Unbeknown to me, one of the alliance corps was going to be upgrading from their C3 to a C4 fairly soon. Being able to buy from another alliance member got them to ramp their plans up. Oh wow, how easy was this. In the end it was two weeks ahead of schedule when I handed over the keys to the new owner of our hole. The final score was all ships and junk made it out alive with no known losses to stupidity. Much better than last time we moved holes. We have had a few months to settle in our new home and having a guaranteed route to K-space each day is heavenly. Maybe I'm getting old but I just like the simplicity. Maybe those 'kids' have the right idea after all.
at 20:45 No comments:
Email ThisBlogThis!Share to TwitterShare to FacebookShare to Pinterest
Labels: corp, eveonline, moving, orea, wormhole

Today is exactly 12 months since we formed the Illusion of Solitude alliance. The formation of this alliance was in response to being unceremoniously dumped from Jadecougar's Li3 Federation. Z3R0 Return Mining and Broken Wheel Mercantile and Trading were the original core of Li3 before Jade instigated his nullsec campaign and we resolved to remain together and not failscade just because we were dropped without warning.

One year on and I am stunned by how we have grown. On formation we had two corps and around 70 pilots. Today we have 300 pilots spread over 13 corps and we continue to grow. Our academy corp, Broken Wheel, continues to be the most violent corp in the alliance both for killing and losing ships. This is great both ways because it means people are out playing EVE and, hopefully, enjoying themselves. In the past year we also liberated a C5 wormhole from pacifistic gas farmers thus increasing the danger in the dark reaches of wormhole space.

So what's the plan for the coming year? I can't say I'm entirely sure. There are no grand alliance level plans. So far we've been pretty good at the occasional large scale Op such as the above mentioned invasion or mobilising to defend a hole when we think a member corp is in trouble. I'd like to see us do more regular organised roams but that doesn't seem to be a priority on the anyone else's mind. At the end of the day, as long as we're all having fun shooting sleepers, shooting people and occasionally maybe mining a little bit (it might not be a bait Hulk you know) I'm happy.

A bit over a year ago I created a character called Geo to do more PvP. This was needed because I'd got a bit attached to Orea's lack of deaths and his good sec rating. During this past year with Geo I've participated in 38 kills worth 9 billion ISK and lost 17 ships worth about 250 million ISK. It's not a vast amount and most of that was on RvB Ganked roams. While I may have learned how to take orders and fly in a large fleet, I certainly haven't really learnt anything about how to compose myself in small gangs or solo combat.

A little while ago Rixx Javix over at Eveoganda had reason to split from his old corp, the Tuskers. This led him to form a new pirate corp that flies the way he wants to. A lot of his ideas match well with the ideals I hold for my wormhole alliance so I decided to take the plunge and become a part time ebil piwate.

So far my ebil piwating has involved moving all my stuff to the vicinity of Hevrice and keeping up with goings on in the forums. I've been hanging out in the corp channel during the day but being at work means I can't exactly undock and shoot stuff. I've learned two things so far. Firstly, all the guys in corp seem to be a pretty cool bunch. There's no ego stuff going on, just a load of pilots enjoying their 'craft'. Secondly, all my ships are fit terribly and need a bunch of work before I undock. I also realised I haven't got a bloody clue how to go about roaming in lowsec.

Yesterday I was sure I was finally going to make it out with the corp for a little roam. The timing was a little early but I figured I could swing something with the wife to get on EVE for an hour or two. Unfortunately it was work that stuffed that plan up badly. I didn't get home until well after the roam started. Bah. Next time...
at 21:08 No comments:
Email ThisBlogThis!Share to TwitterShare to FacebookShare to Pinterest
Labels: eveonline, geo, pirate, pvp, stayfrosty
Newer Posts Older Posts Home
Subscribe to: Posts (Atom)