The Ships Of New Eden

Almost all the ships in EVE Online are works of art. Often we taken them for granted by either being too focussed on little red + symbols on the screen and/or by being zoomed out so far that all we see are little white boxes everywhere. If you recognise yourself from this description you would do well to take a look at this video made by EVE Outtakes. It's not short, coming in at barely under an hour, but it does make you stop and appreciate these ships for all their beauty.


Told you it was good.
at 18:18 1 comment:
Email ThisBlogThis!Share to TwitterShare to FacebookShare to Pinterest
Labels: ccp, eveonline, ships, video

I actually managed to take part in Rixx Javix and The Tuskers' Death Race today. I wasn't 100% certain I was going to be able to, but thanks to a forgiving wife I managed to make it happen. I even managed to record my whole event.

Over the last few days I set up a ship based on a Stabber hull I had lying around. I fitted an 100MN Afterburner expecting to have to burn out of bubbles in nullsec mid-race. I also fitted a large Ancillary Shield Booster expecting to take some damage en route. Sadly, neither of these fittings were particularly useful. To them I added a trio of Warp Core stabs, some shield resists and buffer and some pretty pointless guns. Yesterday I spent some time pouring over a map working out that the first ten systems were covered by only one route through lowsec. The only thing to do was to make tactical bookmarks on each gate so I could approach the inevitable smartbomb gate camps from an unexpected angle. This turned out to be a superfluous activity.

Come race day I was all set up in system. People were x-ing up in local from at least 15:00 even though the rules clearly stated 16:00 was the earliest time to join a race fleet. I hung around for a while and joined fleet around 16:30 - didn't want to be too early nor too late to this party. Thirty minutes later, and with my wife delivering food to my pod, I was ready to race.

I suffered a little confusion to begin with when the first destination was announced. EVE being EVE meant people were announcing in fleet that the notified destination wasn't real and that the fleet we were in was fake. I had planned on giving people a minute or so head start to avoid the initial gate camps somewhat so I used this time to figure out if my fleet was genuine. A Tusker was the Fleet Commander and was the one announcing the destination so I took it as read that this was genuine and set off. This led to another point of confusion. My autopilot showed a route via hisec. We were told the route would be through lowsec. Would taking the hisec route be cheating? I decided not to find out, adjusted the AP to stick to lowsec and headed off.

It turned out my first ten systems were spot on and I safely traversed them using the tactical bookmarks set up the night before. In retrospect this was probably not required as most of the gates were empty. I quickly fell behind. Being behind became a theme of the evening. When I was many jumps from each waypoint the interim games would be announced to allow stragglers to catch up. As I approached each waypoint the next destination was announced. This was my third point of confusion - should I continue to the current waypoint or switch routes to the new one? From what I read from Rixx there were going to be people taking screenshots to ensure everyone fully completed the course. To me this meant I should continue to the checkpoint before resetting my autopilot. I'm fairly sure this was not sensible as I continued to drop behind during the next two checkpoints. Sometimes I would have TiDi chasing me, sometimes there would even be ships on grid with me. In general I pretty much felt like I was roaming lowsec alone. Not really the Death Race I expected. A bit boring really.

The final system, Y9G-KS, was announced as being a paltry single jump into nullsec. I had expected a passage of nullsec somewhere in the middle, hence my AB fit, so this was a little disappointing. Nevermind, I was sort of having fun taking part in the community event, even if it wasn't that exciting. Laying in my course I found there were over 20 jumps between me and the goal... and I still had to visit P1@0 in New Eden. *sigh*

Again I subjected myself to a boring set of jumps which can be abbreviated as... suddenly I arrived in Y9G-KS. Oh look, bubbles on the gate. Almost like someone was expecting us or I'm crazily late to the party. I suspect the latter. I decided to burn directly upwards before heading away from the gate to get my bearings. Sadly, just as I get to the edge of the bubble Rote Kappele decided my Stabber had lived too long and made it die. Oh well, I'm in a pod and have had time to reconfigure my overview to show the finish line - a GSC. Not expecting a hope in hell of slowboating over to the finish line I started. On comms with some corpmates I counted down... 30... 25... 20... 10... 5... I'm here. Holy shit, I finished the course. To be honest that was more unexpected than making it through the first system.

Kudos to The Tuskers for running the event. I would have liked it to be more eventful but my opinion is from only one single point of view. Whether this race was a success will require many others to put their views across. Regardless, I think this was great and maybe one day my alliance can assist The Tuskers in running a future death race.

I'm sure you don't need me to tell you about it, but just in case you've somehow missed the news here is something you should take part in. The Tuskers are hosting a Death Race this weekend. The basic premise is simple: pilots get in ships; pilots race from point a to point b to point c; first pilot there wins. With a death race there is of course a twist. This being EVE there will be people trying to kill the participants. This being EVE there will be participants trying to kill the participants. All in all it should be a whole barrel of fun. 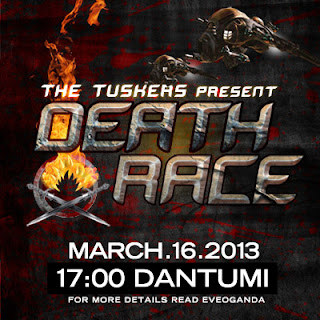 In addition there are more prizes for 'interesting' methods of crossing the route. The full prize list can be seen on Rixx Javix's blog.

I have no idea if I will actually be able to take part but I'm going to be fitting a ship up for Geo to fly. Come 17:00 on Saturday if I can swing an hour of EVE time I'll be there. Where will you be?
at 22:58 No comments:
Email ThisBlogThis!Share to TwitterShare to FacebookShare to Pinterest
Labels: eveonline, geo

Nothing to see here

I've been missing for a couple of weeks. I've not had anything exciting to write about. Sad really. I had a week away in the USA to give a best man speech at my friends wedding. It's surprising how tired I felt for a week coming back partly due to the five hour time difference. So tired that I actually stayed up to run the eleven accrued anomalies in my home wormhole. Fast forward several hours and several beers and I was rather drunk and babbling nonsense but we had eleven less anoms and up many hundreds of millions of ISK.

Other than that I've been fully in market mode. We had hoarded rather a lot of PI in our wormhole and a fortuitous connection to another wormhole in the alliance gave me the opportunity to move a few hundred million cubic metres of stuff to our alliance mate's C3. The plan was for me to use my alt who lives with them to move it out their semi-frequent hisec connections. Thankfully the CEO of that corp moved it all out while I was giving my bad speech leaving me the simple task of hauling it all to Jita and selling it.

What a lot of junk we had and now it's almost all sold. I never want to update a sell order again. I honestly don't know how people can be pure marketeers. I'm just not cut out for that. CCP should maybe think about forgetting about ISK fractions below 1000 ISK. Bloody 0.01 ISKers.

I've also had to catch up on my T2 BPC invention. One thing I'd love to know is why CCP insist on showing menu options that don't apply. Examples would be research options on BPCs or Invention on T2 BPCs. Given the client must know these are BPCs given it shows a different icon to BPOs or T1 BPCs why can't it also show a smaller menu. I know the UI is dated and slowly catching up, but those options should never have been displayed from day one.

This has been a bit of a stream of conciousness to prove I am still alive and I am still playing EVE. I'll leave you with a nice panoramic screenshot to enjoy. Hopefully I'll return next time with a more contiguous story to tell.