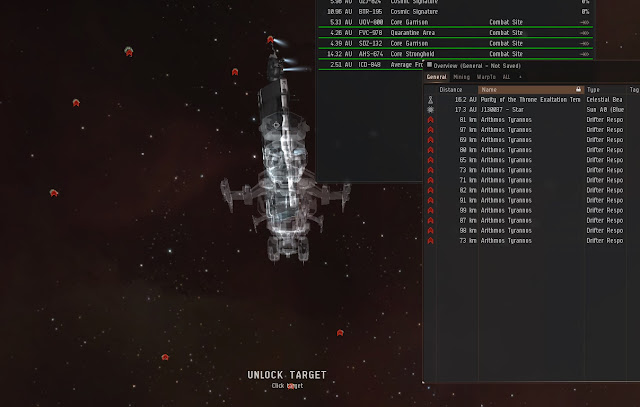 To quote my corpmate who took this screenshot in J130037: "Yeah, fuck that hole".
at 23:15 No comments:
Email ThisBlogThis!Share to TwitterShare to FacebookShare to Pinterest
Labels: drifters, eveonline, screenshot

The problem with new player retention was inadvertently pigeonholed on comms tonight:


"It's PVE; you do it for the ISK, not the entertainment"

Almost everything was unpacked now but there was still no sign of the writing chair. Oreamnos had been asking everyone he'd seen, and spent hours digging through the computer inventory, but it was as if the chair had never existed. Walking past his writing desk for what felt like the millionth time since the new office was set up Orea noticed a small piece of white paper had been left for his attention; the writing simply said "Check out the view".

There had been no reason to open the shutters on the office's massive view port. He knew the view of a distant sun was hugged by artificial representations of the wormhole system's planetary orbits. Still, the note had been left for a reason and with nothing better to do right now he might as well take another look outside. An instruction to the citadel's computer made the shutters slowly roll open.

"Bastards!", Oreamnos swore out loud to nobody in particular. There, right in the middle of his window, occluding the view and bracketed by the computer as 'Unknown' was the clear outline of his favourite leather writing chair. "I'll kill them all!"

at 07:59 No comments:
Email ThisBlogThis!Share to TwitterShare to FacebookShare to Pinterest
Labels: citadel, eveonline, fiction, orea

"About bloody time" Oreamnos though as he wandered through the mess of his new office. In the corner, recently uncovered, was an antique oak writing desk which he hadn't seen for weeks. Looking around he realised the battered leather chair which went with the desk was yet to be unpacked.