I was unpacking and putting away all the presents acquired by my children over Christmas when I came across this: 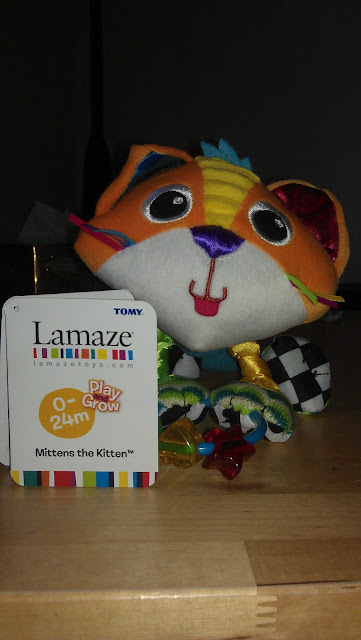 I always knew Mittens was a pussycat. I've recently been wondering why he's been fairly invisible in the machinations of New Eden over the last few months. It seems he's been modelling for a TOMY toy.

There is just over two weeks left in the kickstarter for Elite: Dangerous. They have received over £800,000 in pledges but still need another £450,000 before the time runs out. For me, the sweet spot for a pledge is £60. For that I get into the beta, receive a boxed copy of the game and also get my name in the naming database used for NPCs. Going up to £100 gives you even earlier access to the beta tests which could be well worth it.


If the above video doesn't convince you to pledge cash to this worthy project then you are probably beyond saving. Direct control of the ships, people, direct control!!
at 12:46 1 comment:
Email ThisBlogThis!Share to TwitterShare to FacebookShare to Pinterest
Labels: elite, kickstarter, random

One of the things I've heard you can do with the new tracking camera is increase your d-scanning efficiency. I had someone mention this to me as soon as the new camera options were patched in but didn't really understand what they were explaining. Today I found this video linked on Google+ and it really helps.


This looks like a massive improvement for people living in K-space where the majority of people will be in locations which appear in the overview. I guess the main improvement for W-space will be for POS hunting, although that didn't exactly take long anyway. Like the advert says: "Every little helps".
at 12:24 1 comment:
Email ThisBlogThis!Share to TwitterShare to FacebookShare to Pinterest
Labels: d-scan, eveonline, feature, wormhole

Hot on the heels of buying tickets for flights and accommodation for Fanfest 2013 comes an email to my inbox. The email tells me that tickets for the event itself are now on sale. Not only that, the tickets for excursions and evening events are also on sale. I quite fancy the golden circle tour with the devs followed by an evening listening to the Iceland Symphony Orchestra perform some of the tracks from EVE Online. I think the pub crawl with a dev will also be on the cards.

This is all getting exciting and it's still months away. Maybe my credit card will recover from all the purchasing of tickets to afford me some beer tokens so I can actually drink whilst there.
at 11:20 No comments:
Email ThisBlogThis!Share to TwitterShare to FacebookShare to Pinterest
Labels: ccp, eveonline, fanfest

Okay so I did it. I didn't expect to this far in advance, but I have. Flights, accommodation and time off work are all booked and I will be attending Fanfest 2013. To be honest I am slightly stunned that I'm going. I can't say I've ever attended anything like Fanfest before, certainly not travelling there by myself. To be fair though, there are so many people going from my corp and alliance that I shouldn't be alone for long. This is going to be some party to celebrate ten years of EVE and I am really looking forward to it.

About a year ago I went to the EVE meetup in Edinburgh which was an interesting experience. Somewhat early on in the evening the group was split in two due to differences in opinion as to where to go next and it appears I ended up in the group who had less fun. I'm sure Fanfest will be a million times better than that experience though.

I'm a little concerned about the timing of the flight home though. It leaves rather early in the morning after the big party. I'm not expecting to make much use of the hotel bed on that last night.
at 10:21 2 comments:
Email ThisBlogThis!Share to TwitterShare to FacebookShare to Pinterest
Labels: ccp, eveonline, fanfest

Retribution is upon us. As I type this, it is ten minutes until the servers go down to allow CCP to release the Winter 2012 expansion to EVE Online - Retribution. With this expansion we get Bounty Hunting as a profession, we get an all new Crime Watch system waiting to be exploted; we get a whole menagerie of rebalanced ships as well as four new destroyers and a mining frigate. In what will probably be a shock to AFK mission runners the mission rat AI is being upgraded and will now switch targets. Finally, the UI has gone all web 2.0 with rounded corners on the targetting systems.

The only question left is: How long will downtime actually last?

CCP have published downtime as 09:00 until 11:35. My past experience is CCP always overruns on major patches by at least double so I'm going to predict 14:00 before we get back onto the servers.
at 09:03 2 comments:
Email ThisBlogThis!Share to TwitterShare to FacebookShare to Pinterest
Labels: ccp, eveonline, retribution
Newer Posts Older Posts Home
Subscribe to: Posts (Atom)