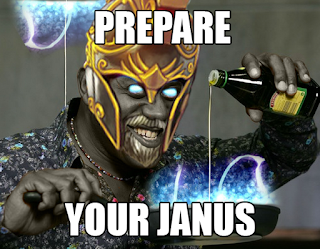 I don't make New Year resolutions. In the past I used to and would invariably break them. Possibly somewhat ironically the only resolution I ever kept was one year deciding I wasn't going to make another New Year resolution ever again. The danger I always found with them is you make a resolution to try and change something, e.g. going to the gym three times a week, and when you break that commitment one time it's all too easy to give up entirely. This year is no different and I have nothing planned. That's not to say I don't use the start of the year to make changes. The month of January is supposedly named for the Roman god Janus. Janus is the god of beginnings and transitions and upping the number on a calendar seems as good a reason as any to get stuff done that I've been parking my arse on for too long.

For ages I've run a website I wrote to help me with corp management. It started as a site where members of my corp submit loot, ore, gas and PI to the corp buyback scheme. We used to use a Google spreadsheet but that was incredibly time consuming to process twice a month. My solution was to write a site where people can copy'n'paste the contents of their hanger and tick the names of people the loot or whatever should be shared between. I wrote about it here a long time ago so feel free to go back and read that. More recently I started to merge another spreadsheet I use to track corp members, their API keys, hangers allocated to them and, of course, whether they've paid their dues. I had gotten partly through that but stumbled with Real Life™ getting in the way. With January rapidly looming I decided to draw a line under the half-finished extension.

January started with the completion of the member tracking. Not only do I now have everything I need in one place the corp members can also log into the site and see how much ISK the corp owes them in payouts. The site also automates taking corp dues to pay for POS fuel and publicly lists (shames) the people who didn't yet pay. As a final piece of functionality I also broke the login system away from our forums and introduced EVE-SSO so my corp mates and I can use the one password to log in to even more things EVE-related. In truth this last part was needed to allow the balance display but it's a nice feature in itself.

Having completed an outstanding task from last year it was time to look forward. It's been ages since we actually had a new recruit who stuck around. The most recent new member of the corp came across as part of an agreement we have with our friends in The Bastards. I'm largely terrible at recruitment, either being too slow to talk with people or just plain can't be arsed with it. So with a new year on us it's time to work at getting people in the corp and dragging our fleet sizes up a little. Our first new member joined yesterday. We've got space for three or four more people who make the grade. I'm not going to beat myself up if it doesn't happen. I'm not making a resolution to recruit n people every month. I just decided to get with the program and try and get more people in the corp to spout nonsense with on Teamspeak and maybe get around to making a little ISK each month.

Want to fly with us? Join the IOS Recruitment channel and be fun and interesting. With a bit of luck I'll still be in the enthusiastic mood and get you signed up real quick.
at 17:41
Email ThisBlogThis!Share to TwitterShare to FacebookShare to Pinterest
Labels: eveonline, IT, new-year, orea, recruitment