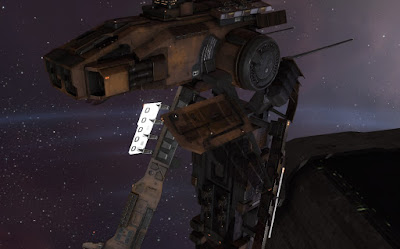 Can you see it? It's small but perfectly formed. Look closer. Closer still. Found it yet? Yup, that's pretty much what I went through trying to find the killmark on my Svipul. If you're still struggling it's on that large, square, rusty plate around the top middle of the image. It's a single wee red/white plook of a marking (ignore sets of double orange lights).

I'm proud of that kill mark. It's the first kill mark I've gotten where I didn't die right after. This makes it the first one I've actually gotten to see. It is also marking my first solo kill of 2016. Mostly it's marking a very amusing kill. We were bored of our static C3 with very little happening. There were a couple of ships appearing and vanishing on d-scan but we'd given up hope of finding them. The decision was made to roll the hole for something new. We were nearly there when one of the hole rollers announced he was getting shot at by a pair of Stealth Bombers. I warped to the hole in my instalock arty Svipul planning to either jump through and rescue the hole roller or pick off the bombers if they jumped into our home.

I landed as the hole roller announced he'd jumped back home. The Bombers didn't follow as the hole went mass critical on his return jump. We had some debate. Should I jump through? What were the chances of the hole dying? Ah, sod it, YOLO! Through I went. Nothing was on my overview or on d-scan. I held cloak while getting my bearings. Then a Manticore decloaked probably expecting a HIC to be finishing off the critical hole. He got more than he expected. I actually thought that I had died as my camera was perfectly in line with his ship when he exploded. It took a moment to realise I still had modules. Once I did realise, though, I locked the pod and moved the pilot closer to a trade hub in the fastest way I know. Local chat said it all

I hung around the outside of the hole for a few more minutes waiting to see if any response would be formed. We also knew there was a scout in our home who would likely be wanting to leave and I would have the best chance catching him. It became rapidly clear he wasn't going to jump out so I went home ready to clear the way for a HIC to finish the hole. As I jumped home in my low-mass T3 Destroyer I collapsed the hole myself. Damn that was tight on mass! I was a little shaken by how close that had been. Two transits of a hole by a destroyer was all it took. It's a good job that scout didn't decide to fly home.
at 09:27
Email ThisBlogThis!Share to TwitterShare to FacebookShare to Pinterest
Labels: eveonline, orea, pvp, wormhole