The best part of writing about Geo on Saturday was I got it into my head that I should make an effort to get into a Brave Newbies Fleet. Around 21:00 a ping went out on jabber that a massive fight was going on in Sendaya. This was just the thing I needed so I logged into comms and jumped into EVE. Suddenly everything went slow as the time dilation dial read 11% TiDi. Oh my, over 1000 in local? Crikey! I jumped Geo into a cheap Atron and got into fleet.

From comms I could hear it was a tricky undock with snipers picking off people as they left station. Wanting to get in on the action quickly I thought "what the hell, it's only a million ISK" and hit undock. With the 11% TiDi effect it took forever to actually be spat out into space but once there I immediately warped to an insta undock bookmark. Warping takes forever in major TiDi and it gave me plenty of time to imagine fleets of snipers sitting waiting for me at the bookmark. Landing there none of my fears were founded and I realigned to the staging POS and warped off.

There was now a bit of waiting around while the FC got himself and everyone else organised. Everyone was told to be in Frigates or they'd be kicked from the fleet. This was to make sure we got the full 6 AU/s warp speed. Eventually we started out and I took a fleet warp to somewhere. It didn't matter where I was going, I just needed to be ready to start targeting, tackling and shooting flashy ships. I landed on grid and tackled the thing closest to me, someone else called point on comms so I switched to another ship which someone else also called. This grew old quickly so I concentrated on locking up primary, secondary and tertiary targets. The flood of broadcasts made this both easy and yet confusing. Easy because the names were in the fleet broadcast window, but confusing because sometimes I'd be trying to lock a new target and it wouldn't work. I quickly worked out that this was because the broadcasts were scrolling so fast I was clicking someone I already had locked. Okay, just need to pay more attention to that window then. More warping around the system, each time trying to lock the ships nearest to me. Quite often the target fleet would already be in warp as we landed so locking them was impossible. Our FC sounded a bit overwhelmed at times but did a decent job keeping it (and us) together as we bounced around trying to land on a fleet and pin them down before they fled us.

Eventually we regrouped at the POS. With the numbers we were facing the FC announced that people should ship up into cruisers if they had them.  I stuck with the Atron because I was still finding my feet and didn't want to waste any more ISK than I had to. There was a long flurry of messages and comms chatter on what ships people should take. Eventually everyone seemed to get themselves organised and we all formed up again on the FC. 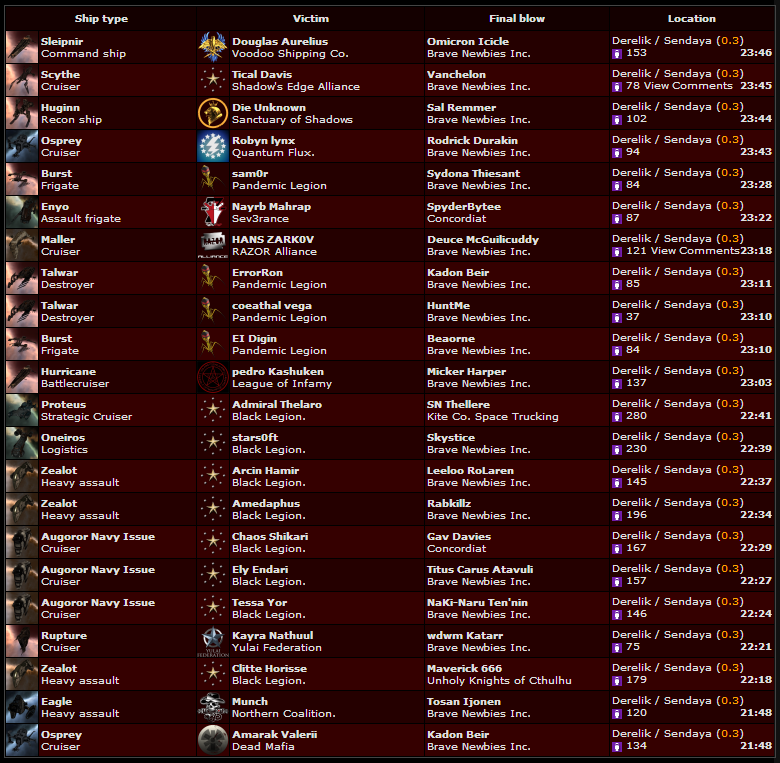 Throughout the rest of the evening I maintained the same level of confusion as to where I was in space. Each time the FC warped us I kept the same routine of locking up what was nearest and shooting the primary. With the larger ships around now it was often hard to finish locking the enemy before it popped but I kept trying. All through the evening TiDi stayed in the 10% to 40% range. At one point someone uttered the classic line "local is down to 750" which raised a few laughs. The only time I've seen local like that is in Jita. Towards the end of the evening the RvB Ganked roam swung around to come fight us. I've been in a few RvB Ganked roams but never faced up against them. In my head I imagined I could hear Mangala Solaris calmly calling primaries and hoped my name didn't come up. To be fair, in an Atron it would be unlikely. After a short scuffle the Ganked roam fled the field leaving us victorious (or so I was told - I hadn't a clue what was going on).

With midnight coming up I needed to head off to bed but checking my personal killboard I was happy to see I had been blessed with 22 kills worth 2.5 billion ISK.  Somewhat amusingly, during the evening I dropped 0.3 in my sec status, which is more than I did during my failed attempt at being a pirate. This is definitely more what I had in mind for Geo, it's just a shame it took me so long to get to the right place with him.
at 22:53
Email ThisBlogThis!Share to TwitterShare to FacebookShare to Pinterest
Labels: brave-newbies, eveonline, fleet, geo, lowsec