I wrote this for my alliance forum but I figured there was little reason to not also post it here.

This Fight Wanted You 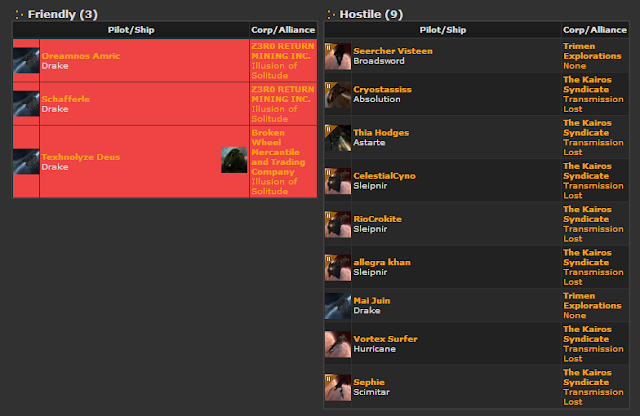 It was a quiet evening and I was settling down to do some industry stuff to pay the bills. Suddenly Jabber lit up with the news that there was a hostile battlecruiser sitting on a K162 with a second one on the other side ready to jump in. "Screw Invention" I thought to myself logging into my main and seeking a situation update.

Schaff and Tex were on running intel on the interlopers. One inside Shirley and one outside. As I logged in the ship inside Shirley departed and they left both sides of our hole. I initially changed from my scanning loki to a bomber before settling on a Drake. I decided I wanted to be in something that could take some punishment in a fight rather than a paper-thin torp boat. After some self-debating both Tex and Schaff did the same.

The PvP fit Drakes in Shirley aren't all fit the same. I believe the fit is a 'best-of-what-we-had' type fit so can give unexpected results when boarding one. After a little tweaking from the spares hanger we all had reasonable fits but Tex found he couldn't launch his drones. This made him the obvious choice to jump to the red side of the hole to act as bait.

A tornado warped in and targeted Tex so he jumped back to Shirley but nothing followed.

Lore joined our Drake fleet with yet another Drake. We put Tex back inside their hole and after a little bit they warped a cloaky scout into our hole. This pretty much solidified that they wanted to fight. Now we were equal on intel with scouts on both sides. Only thing left was to see what they would bring to the fight. Did they want a close fight or a curb-stomping victory? Well, the kill report at the top shows the answer to that, but I'll continue anyway.

Tex reported the Astarte on d-scan and we decided at that point we were going to fight pretty much regardless what landed on us. The scout reported the Astarte, Broadsword and two of the Sleipnirs landing on the hole and jumping through. I started laughing at this point and we went for what kills we could get. I was already wondering what I would do when I got to highsec. The Broadsword was first to decloak and we just waited to see what would be next. It took a while for anything else to shed their session cloak so we started shooting at the Broadsword just because it was all we could. Finally the Astarte shed its cloak and it became primary. We got the Astarte to half armour and it jumped back through the wormhole so we switched to one of the Sleipnirs.

At this point I started moving my Drake to get out of the Broadsword's bubble to maybe save my pod. Schaff was taking too much damage so jumped through the wormhole to try and save his ship only to be met by the Astarte and killed, getting his pod out safely. Having little impact on the Sleipnir we went for the Drake to see if we could kill one thing before going down in flames. Around this point Tex died and lost his pod shortly followed by my Drake exploding. Thankfully I'd gotten out of the Broadsword's bubble and with some judicious use of spamming 'warp to' got my pod to safety.

Good fights were exchanged in local while the invaders extracted themselves. We were told that Schaff could take his pod home but an inspection of their side of the highsec hole showed the Broadsword sitting waiting so he decided to take some highsec shore leave instead.


What did we need to make this fight more fun?
More people, of course!

Edit: The opposing FC told me he would have honoured the offer of safe passage for the pods. I believed him at the time but my corp mates weren't so sure. This ehonour thing part of what I love about wormholes. We were enemies for an hour or so and after that it doesn't matter anymore.
at 02:12
Email ThisBlogThis!Share to TwitterShare to FacebookShare to Pinterest
Labels: eveonline, orea, pvp, wormhole