Last weekend I had Alliance Tournament X streaming on my PC. The battles are quite convenient little chunks of time lasting no more than ten minutes. This meant I could take care of non-EVE stuff while diverting my attention every now and again to the raging battles on my screen. However, I'm not going to write about those fights as I am far from qualified to do so. 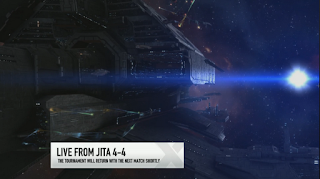 What did catch my attention was the intermission feed, live from space in a couple of locations around New Eden. I caught feeds from the popular market hubs of Jita 4-4 and Amarr 8 (Oris). Both of these feeds filled up rapidly with pilots showing off their blingiest ships or giving us laser shows and exploding ships. In a genius move by CCP they then set up a feed from the Osoggur gate in Amamake. What better way to create some good viewing than setting up a focus point in lowsec. Everyone wants their five minutes of fame and I'm sure the resident pirates gave them that and more. I certainly saw a few ships go pop.

As far as I know, this 'feature' provided during the intermissions was inspired by the actions taken by a player during the recent 'Burn Jita' campaign. During that event someone had a pilot undocked and was broadcasting the expected carnage live from the Jita 4-4 undock. Unfortunately most of the action occurred at the gates of the system, but the idea was there. And what a good idea I think it was and is. 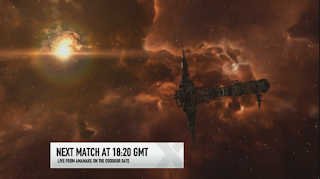 So, what do I think CCP should be doing with this? Well the answer is pretty obvious. For some time people have been complaining about not being able to see the outside of a station when they are docked up. People also complain about 'station games' where people undock to take a look outside and then redock as soon as their session timer allow it. Add to that the complaints about there being nothing of any value on the Captains Quarters TV screen and you get a perfect recipe for success: Showing the outside of stations from the inside.

Now, with us EVE players being the devious people we are, the first challenge will be handling the inevitable parking of ships in front of the camera to obscure the view. The obvious way to handle this would be to reposition the camera to another location with a nice smooth fade effect, like a director switching camera angles at a concert. In fact, a cycling of the camera view every few minutes or so would possibly be a good idea anyway to generally make it harder to block the view even temporarily. I would suggest these positions be decided at random rather than set a finite number of positions, to further increase the difficulty of screwing with the system. I wouldn't want to make things too easy on people watching this for a safe undock. There would be no desire to display information such as standings or pilot names, etc. This really should be a single feed provided to everyone who wants to engage Captains Quarters and simply peer outside.

Setting this up on all stations in EVE is probably a real stretch from a technical point of view. A limited roll out to the most popular stations would be sufficient to prove the idea works. Following on from that CCP could roll out to at least one station per solar system, maybe even charging higher taxes for the services on these 'safer' stations.

However this is handled it would be really cool to have the Captains Quarters TV actually do something useful and may even prompt me to switch to CQ from time to time (on the odd occasion I'm actually in known space). What do you think?
at 07:00
Email ThisBlogThis!Share to TwitterShare to FacebookShare to Pinterest
Labels: alliance, alliance tournament, alliance tournament X, captainsquarters, ccp, eveonline, feature, jita, live feed, screenshot