As highlighted by Rixx Javix over at Evoganda, there has been an unfortunate fate visited on the Vagabond. The terrible fate in this case is the loss of its distinguishing neck frill. The net result of losing the frill for this ship is to take something special away from its Minmatar identity. What is a Minmatar ship without some form of paper-thin wingy bits? Sure, rust is essential but wingy bits are almost as important. 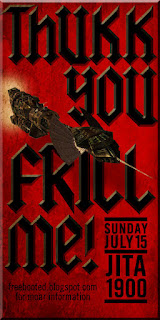 Now to be honest I can't remember ever actually seeing a Vagabond in space. I'm sure I must have but I'm not the most observant pilot. However, should a Vagabond be bearing down on me in space it would be much more terrifying with its cobra-like appearance. I would try to flee from it, screaming in fear, rather than spending a few moments trying to work out whether or not I'm being engaged by a battle Iteron.


To fix this injustice, Seismic Stan over at Freebooted has organised a protest march for Sunday, July 15th. The intention is to meet up in the, becoming traditional, location of the Jita memorial before heading in the general direction of the Thukker Mix HQ of M-MD3B. Additionally, Khalia at My Loot, Your Tears is organsing a suicide-gank raffle in nearby Jatate prior to the main event. This means you'll need at least two Stabber or Vagabonds to fully enjoy the day.

After some modification to his skillqueue, Geo will be there in a reasonably fit Stabber, will you?
at 07:00
Email ThisBlogThis!Share to TwitterShare to FacebookShare to Pinterest
Labels: community, eveonline, geo, jita, live event, protest