I took a brief break from EVE this past 10 days. I had been reading about an epic adventure going on in Elite: Dangerous, the Distant Worlds expedition. The people involved in that project are flying with approximately 1000 pilots to the opposite side of the galaxy. Their route will take them some 80 thousand light years before they reach the destination. When I learned of this epic quest I thought I would try and catch up with them and then join their main fleet.

This turned out to be a pretty optimistic and foolish idea. I don't play E: D enough to have much money in the bank. I fitted out my ship with the best jump drive I could. This got me only 15 LY per jump. If I'd known how far away the overall journey was at that point I'd have given up there and then. Over the course of the past 10 days I spent way too many hours each day jumping five systems at a time then scooping fuel at a sun before continuing on. I made it to checkpoint 1 fairly quick and felt smug. I would catch them up in no time. Getting to checkpoint 2 probably took 16 hours of continuous play. It was at this point I realised quite the scale of the journey. I had travelled one eleventh of the way to the centre of the galaxy. Getting to the other side was double that! 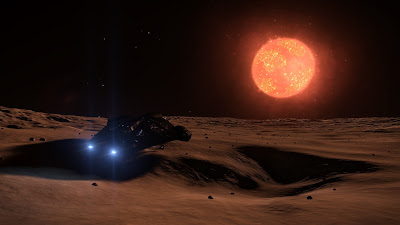 I soldiered on through the past week jumping system to system whenever I had some spare time. I was slowly closing the gap on the main fleet but I was starting to think I would be lucky to meet with them before they reached the end of their outwards journey. I don't even want to think how many hours I spent jumping away from the main bubble of inhabited systems. The journey stopped being fun and became a proper chore. In my head I still wanted to catch a group of people I was over a month behind.

It was a nice day yesterday. I was doing some maintenance on my motorbike while pressing on with my mission in Elite. I would do my 5 jumps then go do some more work outside while refuelling at a sun. It was going well until a neighbour visited. Then another. So we sat outside and chatted. After about an hour I suddenly remembered about my ship refuelling at the sun. I came in just in time to see it overheating through solar exposure and my life support failing. Ah, bollocks! I was 11,000 LY from any chance of repairs. No way I could cover more than 1000th of that distance in the five minutes of oxygen I had.


It had taken me a week of not-insignificant time to get so far away from the start. It took less than an hour of distraction to send me all the way back to the beginning. I felt a lot more punished by that than anything EVE has ever dished out to me. Elite: Dangerous picks up a lot of criticism for a lack of content being built in. In the true nature of a sandboxy game the lack of content is largely created by a lack of imagination. I salute the organisers of the Distant Worlds expedition. They are better people than I for the journey they organised. Maybe I can scrape together more credits, buy a proper exploration ship, and join them on their next epic adventure.
at 16:28
Email ThisBlogThis!Share to TwitterShare to FacebookShare to Pinterest
Labels: adventure, elite, image, orea, screenshot