Thukk You, Frill Me! - Aftermath

I've just found my way back to Jita after the 'Thukk You, Frill Me!' Protest run and subsequent RvB Ganked roam. This turned out to be a somewhat slow-burning event with a successful, die-in-a-fire ending. So, on that basis, I am quite happy. The fleet peaked out at almost 200 members which is apparently not a record for a Ganked night, but was up there quite high.

The fun began in Jita with a flashy Armageddon undocking and redocking as he was shot and ran out of shields. We decided this wasn't acceptable and headed over to unleash 100+ Stabbers on him. He died and we set off for Akora, the first lowsec system where we met up with our fellow fleet members with poor sec status. From there we headed to the Thukker head office of M-MD3B via N-RAEL. There were a few potential fights on the way but the only thing that actually materialised was a poor Thrasher that wandered into our path. Funnily enough when local spikes but something close to 200 people the tendency of the locals is to dock up.

Just before M-MD3B we had a sniff of a battle. Due to some cunning randomness on the EVE autopilot's behalf our fleet had split into two groups and was about to land on a gatecamp in a fantastic pincer movement. As I was in the smaller fleet we were ordered in first. We jumped in to find, well, nothing. Disappointed by this turn of events we headed to the Thukker Mix station to protest. It appears the Thukker Mix CEO had heard of Seismic Stan as the protest organiser as, when Stan and a few others opened fire on the station, it was only Stan who got popped.

Now the protest was out of the way, I stuck with the RvB Ganked fleet for the journey down to find some more fights. We headed down to Utopia in Curse and ran around a little trying to find someone to fight. People were getting a bit frustrated at this point and ended up chasing some non-flashy ships into Sendaya. As Sendaya is lowsec, the gate-guns took offence at this and started shooting. Eventually the offending Megathron died, but by then I was with the main body of the fleet heading for Catch.

We were told to set our destination for GE-8JV and we were never to make it past there. A couple of jumps out we received word of an Against ALL Authorities fleet in GE-8JV. We had been on the go for five hours or so and it was time to die. We jumped into the system and immediately re-approached the gate to see what the -A- guys would do. Obligingly they came to us at zero and we all jumped back into V-3YG7. I don't believe I've ever seen so many battleships in one place, nevermind ones that would like to blow me up. We aligned away from the gate to see what was going to happen and as -A- came through they bubbled up and the fight was on. Our FC started calling primaries and I actually managed to get myself sorted and shooting at the right things. First we took down a Phobos before switching to a Navy Armageddon. We couldn't break through the reps on the 'geddon so we switched targets and killed a Curse and then a 1.2 billion ISK Loki. 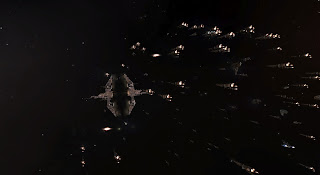 By this point the twenty or so Armageddons' smart bombs were taking their toll and I found myself in my pod. After a worrying minute where I thought nobody was going to pod me back to hisec I found myself in Hek. Hmm, why is my clone in Hek? Oh well, home to Jita. I had great fun. I went out to die and I managed that quite successfully. I also managed to help destroy almost 2 billion ISK worth of stuff so I died happy.